by support | May 5, 2022 | Biz Strategy, Getting Started As An Entrepreneur 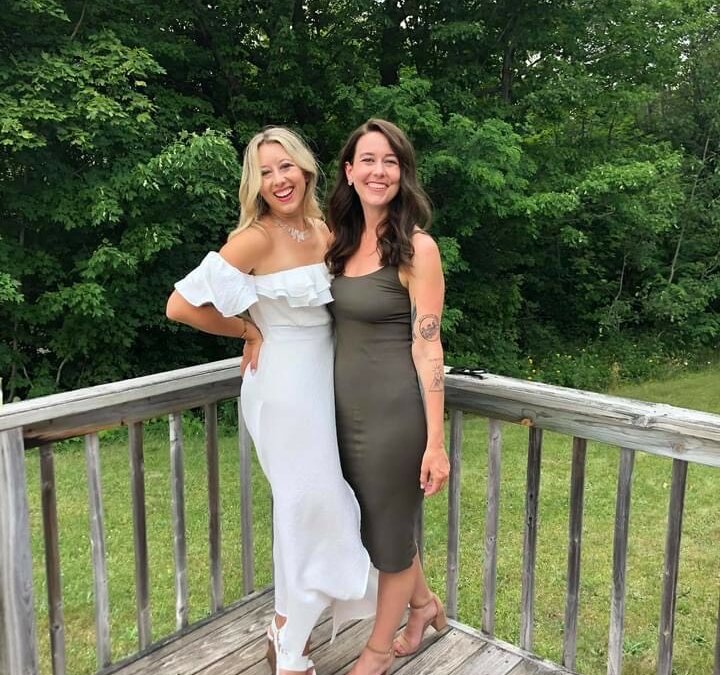 I was only half way through my coach training program but ready to start taking paid clients. Part of me knew that I was a good coach, I had been having success with my practice clients and getting great feedback from the leaders in my program.

Another part of me felt scared, under qualified, panicked, and like a fraud.

My program invited us to set an investment that was a true energetic exchange for the way that we would be partnering with people to transform their lives, a minimum of $550/month.

I felt terrified by that thought. That was almost as much as my rent every month. As a 26 year old with $100,000 of debt the thought of investing, or receiving, $550 per month for anything seemed like a lot.

So far I had received $0 coaching. Now I was going to ask the first person who hired me to invest $550 per month in themselves with me?!

I had known Alysce for years. I first met her when I was in college and she was a hair stylist at my mom’s salon.

We had a history…

One day she walked into the break room and caught me trying to peel an avocado like an orange because I didn’t know otherwise.

Another time I had an early morning Saturday hair appointment with her and had to call her and ask her to pick me up from my dorm because I had a *touch* too much wine the night before.

Once we had it out in a screaming catfight at work.

When I got dumped just before my birthday she was one of the first people I called sobbing.

And now I wanted to talk to her about being a LIFE COACH. Possibly even hers. Gulp.

I had called Alysce and shared with her that I was up to something new. I asked if she would meet me for coffee so I could share with her about the life coach training program I had been doing. She said yes.

We met and I was freaking out, but trying to be cool. I loved Alysce. She was a good friend and I did not want her to think I was dumb, salesy, stupid, or pushy.

I got really curious about what had been going on for her and shared about the transformation I had been experiencing. Eventually I mustered up the courage to tell her that I was ready to take on clients and asked (while profusely sweating) if she knew anyone who would benefit from the transformation I was looking to bring to people.

She looked at me and with a touch of her own nerves said, “I think I’d really like to work with you.”

WHAT?!?! Alysce, who taught me how to cut an avocado, picked me up while I was hungover, consoled my broken heart wanted to hire ME?!

I stepped into every last ounce of courage I had. I shared the specifics of working together, told her I would be looking for a minimum 4 month commitment, and that the investment was $550/month.

In 1 conversation, the very first conversation I had about coaching, I had my first client.

Alysce saw my transformation and she saw what was possible for her. She believed in herself enough to be supported while she took the next step on her journey. Being able to coach Alysce, especially as my first client, was an incredible honor.

Alysce and I worked together on and off for 4 years. During that time our friendship became even closer. We stood in the cold for hours to be in the 3rd row at a Macklemore concert and we booked tickets to Iceland at 2am after sharing a bottle of champagne. We truly were living our best lives.

I supported Alysce through making a major career shift and leaving her job as a stylist. Around the same time I was looking for help in my business and she joined team Rise as our virtual assistant. Earlier this year Alysce expanded to become our Project Manager (which she is killing. If you are our client you know Alysce is the glue of our company.)

She stood next to me at my wedding and I’m about to visit her in her new home just off Central Park in New York City (a dream come true for her.)

We have grown together, and supported each other all along the way.

I sure am glad I had the courage to invite her to work with me. It’s undeniable that conversation was life changing for both of us.

I stumbled my way through my first sales conversation. I probably wouldn’t do any of it now how I did it then, except for the parts where I was curious and courageous.

But because I was willing to start I grew. I learned. I know that a big part of being courageous enough to have the conversation with Alysce was because I had just made an $16,000 investment in me months earlier. I knew the power of being a yes for your dreams.

Now Alysce and I work side by side in the empire we’re building together.

I am grateful for Alysce, our friendship, business partnership, and her willingness to bet on herself and me when I just barely had the courage to do it myself.

Are you an entrepreneur holding back from having sales conversations? You never know who’s live you could change and by how much.

Since my first sweaty palms conversation with Alysce I’ve come along way. Two million dollars in business later and I know how to have powerful, live changing sales conversations.

Do you want to step into this for you? I’m co-leading a 4 week sales immersion experience starting on Monday.

If you want to hop into Sell Like a goddess join me here.